In Amecet we like to re-settle the children back to their families as soon as they are stable enough. If there are no parents, we look into the family who is able and willing to care for the child.

We receive many children in Amecet via the Police. This are children who are lost, run away or there is a problem in the family and the child needs a safe place. In the first 6 months of 2015, we got 22 children via the Police. Last week, a boy was brought to Amecet by the police, they come with a letter from the Officer in charge of Child and Family Protection Unit. They tried to get some information from the boy, but sometimes that is impossible, because the child is too young. 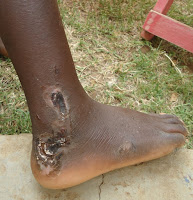 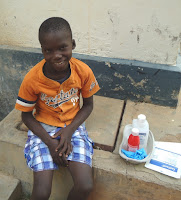 This boy was called Juma, but to some of us he said that his name was Tom. He had big wounds on his legs and many jiggers in his feet. It took time to get them out and treat the wounds. We took him to the doctor and he was started on antibiotics. In the mean time, Elias and Simon (our Social Workers) tried to get his story, which was not easy, because it changed all the time. He told us one day he was 10 years old and the next day that he was 12 years old. His mother had put him in a taxi, to go to his father, but he got out somewhere and had been taken in by a local counsellor. They tried to get him to his family, but when it didn't work out, they brought him to the Police (this was after 2 weeks!). The Police brought him to Amecet.
After a lot of questions Simon and Elias decided to bring him back to his mother. They notified the Police Officer of child and family protection and the probation officer. They all climbed in the car, together with Juma/Tom and went on the way. It was far, more than 2 hours drive, when they came in the area where Juma/Tom had told us that he came from, they went first to the local Police station there. They also climbed into the car, together with somebody who recognised the boy and could bring them to his home. 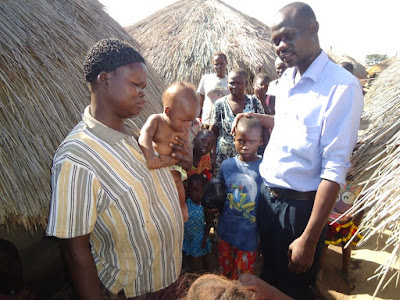 There they were met by the whole neighbourhood, when they see that something is going on, they are all coming to see! They found the mother, on the picture here, you see Amos, the Probation Officer, handing Juma over to his mother. The whole story was told now, the boy is 8 years old and his name is Juma. His  mother had put him in a taxi to Soroti, to his grandmother, where also his other brothers and sisters stay. His grandmother stays almost around the corner from Amecet!!! Juma didn't want to go to school and to his grandmother, so he had made up other stories..... 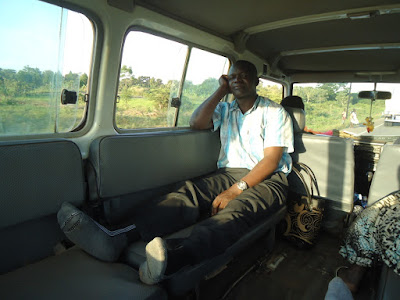 MISSION ACCOMPLISHED
After handing Juma back to his mother, everybody climbed back in the vehicle and went on the journey back to Soroti. Elias was driving, so Simon could rest... It is not always easy to resettle a child, but at least the child is safely back with his mother: Mission accomplished!!!
Posted by Amecet at 2:33 AM