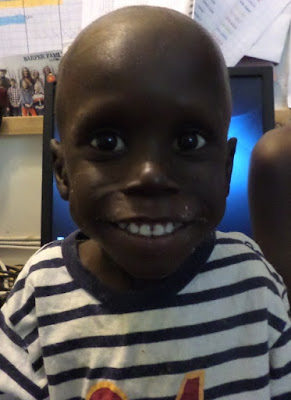 This Sagal, the little boy who was brought to us on Friday, I wrote about him in our blog. It is amazing if you see the difference in his eyes!! He still has a long way to go, but the beginning is there! he is quite amusing, he can talk and even walk, on his skinny legs. And he is so small and tiny, still under the 7 kg, but he is three years old, so he understands a lot. He knows what he wants and he has a strong will!! When he decides that he doesn't want to drink his milk, but he wants to eat a guava instead....than you have to be very creative to get the milk inside him first, before the guava. Janneke took him to the hospital yesterday and he is checked and blood tests were done, we have good hope about him, we can see him getting interest in the toys and what do you think of this beautiful smile?? 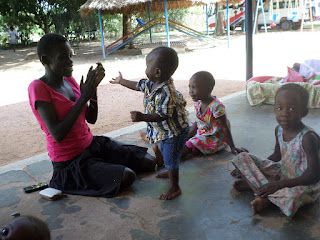 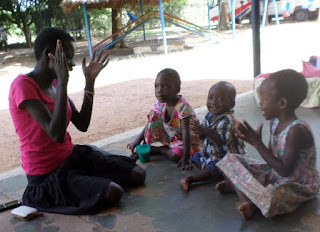 When we re-settle children back to their home or relatives, most of the times we keep contact, especially when we have some doubts. Joseph is one of those children,he has a severe cleft pallet and is in need of an operation. When he is 10 kg he can be operated. His situation is a bit complicated, because his mother is in prisons. In the blog of January 10, 2015, you can read his story and how we resettled him back with his mother...in the prisons.
We go weekly to the prisons to give a food supplement to the mothers with small children and so we see Joseph very often. We have been weighing him, to see if he was gaining towards the 10 kg. At first he did, but the last two months he was not gaining, but loosing weight, We talked with the mother and the Prison authorities and we all agreed that we should take him back for a while. The first two days he cried a lot, missing his mum, but now he is doing better. Sarah likes him very much and you see them playing here. He is also doing his first steps and.....he is gaining!! we are happy with that, his teeth are growing and he really needs this operation! Next week, when we go to the prisons to give the food supplements, we will take him with us, to visit his mother! 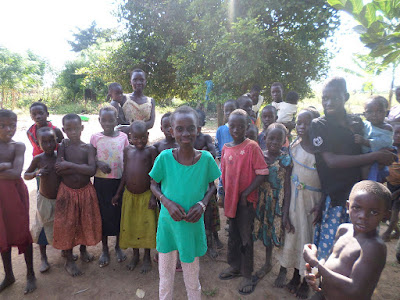 Then we made a difficult decision this week about Gabdesia. I have written several times about her. We see her going up and then she is going down again. She gets special little sacks with a peanut paste from the hospital. And they really helped her, many calories in a small quantity. But since some weeks she throws them away, we find them everywhere, she eats half of them and then she dumps it. She also didn't want to eat much. we have tried everything, talking, begging, being firm etc. etc. the only thing she kept saying is that she wanted to go home. So we decided that we had to bring her home. She is 14 years old, So yesterday Elias and I brought her back to her village, with medicines, with a box peanut paste and clothes and other things. On the picture you see her standing in the middle of her sisters and neighbour children. She is happy, smiling.
Please keep praying for Gabdesia, that it will turns out all for the good!!!
We will visit her again in two weeks.
Posted by Amecet at 11:44 AM