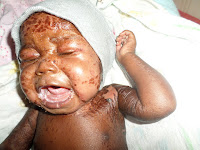 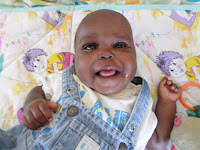 On August 8 Judith was brought into Amecet. A very malnourished little girl, Lot of crying and a lot of oedema, she lost all of her skin, but now she is a beautiful smiling, happy girl! This is truly a success story!! 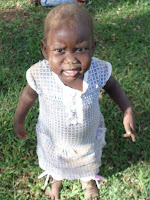 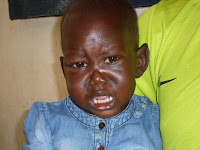 That same day, Mary was brought to us. she came from the same village as Judith. She was also malnourished, started to get swollen feet and was very unhappy. Look at the picture right. The same little girl, playing and very dirty from the sandbox, Happy, talking and knowing what she wants or not wants 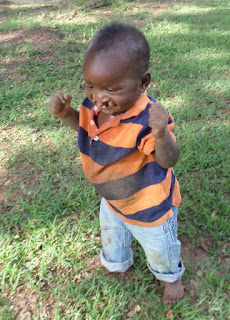 Then Joseph, he has been with us before, but was united with his mother, who is in the prisons. His weight  needs to be 10 kg. before they can operate his cleft pallet. It did not go so well in prison, so we all agreed to take him back in Amecet to help him grow better. And it worked, he is almost 10 kg. now, but also his development really starts to change. he is walking now!!! He is bullying every body around, it is a real boss! 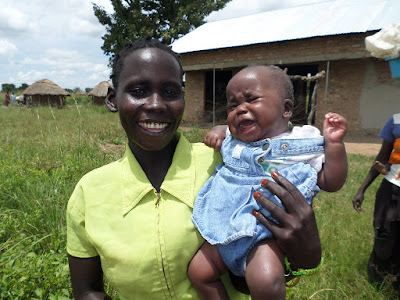 Today we brought Judith back to her mother in the village. her mother has been quite sick before, but in those two months, she really got strong and healthy. she was very happy to hold Judith back in her arms, even she was crying (she just woke up after being asleep during our trip). We are going to help the mother with milk money and porridge flour and sugar. Also the community health worker is keeping an eye on her and also on Mary! 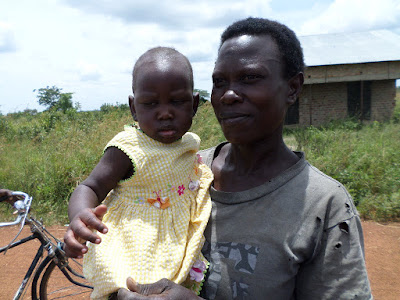 And also Mary's mother was so excited to hold her daughter again in her arms. It is so good to work together with the local health workers, they also had been the ones to bring them to us. they had found them in their community and were very concerned about them. It is so good to bring them back on this way, to their mothers!!! Many of the children coming to Amecet, don't have mothers anymore, so it is good to encourage the mothers and to come alongside them.

Then the new challenge..... 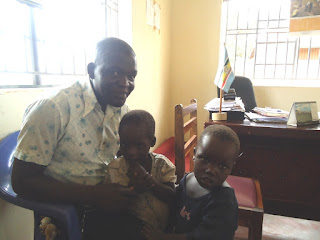 Simon was yesterday in a village for something and the village chief called him to his office. There was a problem...there was a lady who was suffering from frequently epileptic attacks ,and she was living there with her two little boys, twins of 3 years. Their house was almost falling apart, they had nothing in the house, apart of a mat and two small cooking pots. Often the little boys worked for their food.....catching water for a local restaurant and they were than paid with food. After the death of the grandfather, the mother was alone the rest of the family had abandoned them and the officials were very concerned for them. '
Simon went back today to see what we could do for the two boys, was there any family around? There is an uncle, but he has refused to care for the two boys, the parents of the mother have passed away. there seems to be nobody around to help the two boys. Simon talked with the people involved and also the village chief and other authorities and everybody felt we could really help the boys by taking them into Amecet and to be looking for a fit family for them. So Simon brought them this afternoon to Amecet. 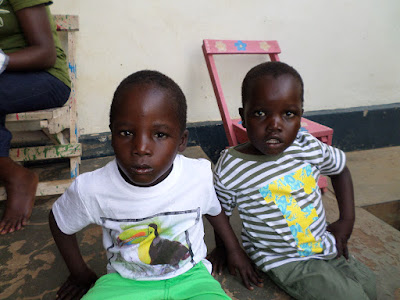 After a shower and nice clean clothes, they look so smart and nice!! They are still shy and a bit overwhelmed with the toys and all the people in Amecet. A lot of work still has to be done in connection with the uncle and maybe other relatives we will find. But Moses and Peter are cared for and we will see what will happen......
Posted by Amecet at 10:02 AM