Even the renovation is going in full swing, a team of 12 Dutch people are working in Amecet, still business is going on as usual!! 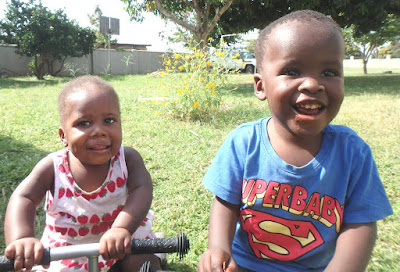 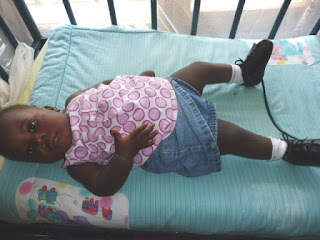 Topista and Jackson on the little scooter that the team brought from Holland! On the picture you can see Topista and the special shoes and the braise that the doctor gave her. We have been to the Orthopedics with Topista every week for many times, every week they renewed the plaster on her leg, forcing the right foot into the right position. Now she has the shoes, for day and night, she is very good in removing them, but we have to put it back every time. She is getting used to it, she moves on her tummy through the house.. And she can even sit on the scooter, which she was very proud of!!! 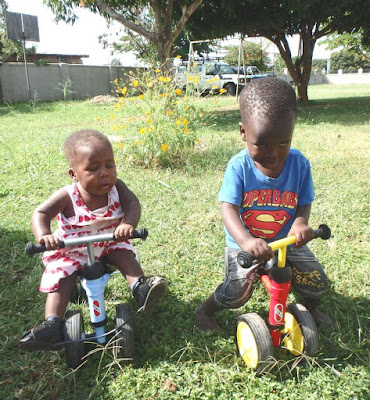 All kind of things are happening, we had two groups of people in our compound, yesterday. They are all coming for the same baby. The mother died after giving birth and the family of the late mother want the baby, but the father and his family also want the baby. They are not really in very good terms... At least there were 15 people at our doorstep. We referred them all to the Probation Office (child protection unit) they need help with sorting out what the best place for the baby will be. In one way it is good, this baby will have a place to go to and is very wanted, we have often babies, nobody wants or who are a burden to the relatives... But it needs good and careful guidance.
Then a boy was brought to Amecet, he is one of our older children, who have been twice in Amecet, he was resettled with his mother and we kept an eye on him. But now he seems to be very confused, he was stealing from a shop and was acting strange, they took him to the police and when they asked him where is your home, he answered Amecet, so they came here with him. We gave him food and Simon went to get his mother, there was counselling, the boy was not doing well, We didn't dare to keep him in Amecet, he is not safe for the other children. Simon talked with them and brought them to the HIV clinic, where they also know them. Today, we will check on them again.
Then a family with three children showed up at our doorstep. The children were all blind, or almost blind and they father said that they have all three cancer in the face/eyes. They were from outside Soroti, someone had tipped them that we might be able to help them... I nearly cried when I saw the children, the boy was maybe 11 years old, one eye was already removed, but one of the girls had one eye which was so swollen and infected, she must have a lot of pain...  What could I do??? We talked a bit and gave some advice, they wanted help for medication and education. We  explained what we are doing as Amecet, that I couldn't help them, I felt so bad, this family was suffering so much. At the end we just helped them with transport money, they need to go to Kampala, to Mulago hospital... 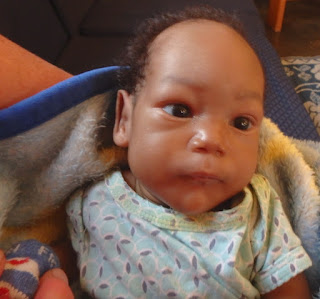 This is baby Esther, her mother was a couple of weeks ago at our doorstep, if we could please help her. She was very weak and sick (HIV+) and it all was too much for her. We talked with her and told her that she should talk with her husband and come back with a letter of her local counselor. It is risky to take a child just like that, what do we do when the mother disappears, how do we find the relatives of this baby? The next day she came back with a letter of her husband and of their local leader and we took Esther into Amecet. The mother also needed to go for treatment, and if we would take care of her baby, she could take care of herself. She was very happy, two weeks ago she came to visit her baby, she told us that she had been admitted into the hospital for a week. She was so happy to hold her baby.. We are worried about baby Esther, she is not gaining so well, is weak and has been on IV treatment and still not doing good. Today she is getting blood transfusion, maybe that will give strength, she is anemic. We are also doing the HIV test today, since she is 6 weeks old now. We pray that she is negative....
I'll end with a good news: Max is now breathing well on his own, we stopped the oxygen machine and his weight is 2.3 kg!!!!
Posted by Amecet at 1:21 AM