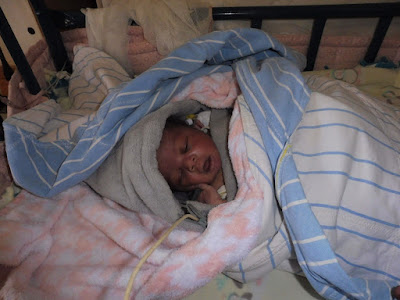 When I arrived in Amecet, this morning, I got the news that there were now 2 babies very sick. At 5 am that mornin, Richard, the new baby who arrived in Amecet on Sunday (read my last blog) got serious breathing problems. Esther had taken him to the clinic at 5 am. The baby was on oxygen and on IV medication. Still Max was not doing well and also still in need of the extra oxygen. I got the doctor of the clinic next door, to come and look at them. Dr. Engulu was very willing to come and examine the babies and to give advice. 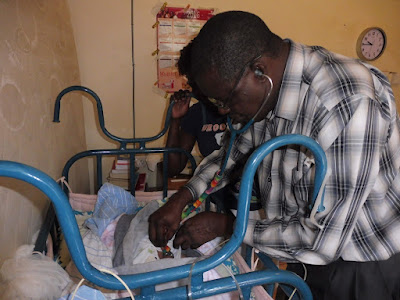 It was hard work for Deborah, with two critically ill babies. She attended to them the whole time. When we tried to feed Max, he got again very serious, his oxygen level dropped and he was gray from color. Also Richard was on and off, I called the fathers of both children, to explain the situation and to ask them to come and see their children. I feel that it is better to be honest, it may be the last time that they can see them??!
In the afternoon  I had to go to the YWAM base, when I left it was a bit stable, so I asked them to call me when anything was changing. After 30 minutes I got a phone call; please come the baby has just passes away. I thought it was Max, but no, it was Richard....... I drove quickly back to Amecet, crying, for the lost baby. If you see the picture from yesterday, it was such a beautiful little boy!!! In Amecet I called the father and told him the news. We would get a small coffin and bring the baby home. So they could just wait for us. The staff was also upset, it went so fast, we gathered in the small room to pray together for Richard's family and spoke out our trust in God, that He knows the whole picture, we have only a little piece and we don't understand why this happened.....
After that we anointed Max with oil and prayed together for his healing.
We laid the little body of 2.7 kg and 48 cm long in the little coffin and Elias carried it to the car. They are on their way now to bring him home, we believe that he is already HOME! 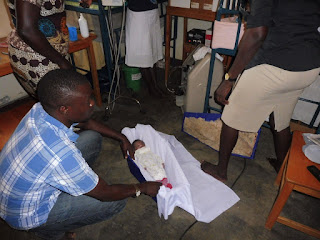 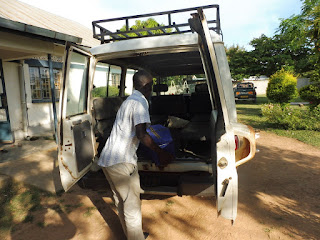 We are staying behind with a lot of questions, and another little boy, fighting for his life. Please pray for Max and also for us, the staff.
Posted by Amecet at 7:54 AM