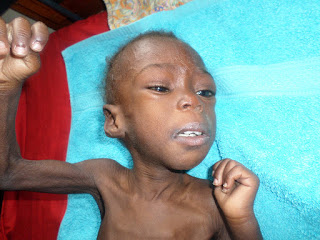 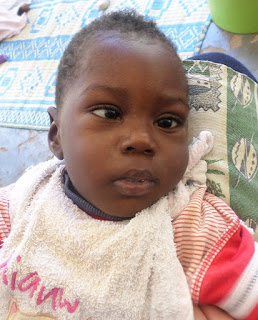 There are 7 months between the first and the second picture. Richard came in Amecet in October 2014,  he was found, dumped by the mother. we didn't know his name, age and medical history. His weight  was only 4 kg and he seemed to be spastic  and very weak. On the second picture his weight is 7.9 and he can smile and react on people. We have not been silent  in the last 7 months. Of course the priority was first his malnutrition, eating was not easy for him. we struggled with him and even drinking milk was not easy, at last we found a cup he liked to drink with. We took him to the doctor and they did several tests, he is HIV-, that was a joy, and we went to get him made a special chair, where he can sit in comfortably and use some of the muscles he would otherwise not use by lying all the time. Simon and Elias found his family, at least the grandparents, it was quite a story, but today we were bringing Richard back to the village to meet his grandparents, who agreed to care for him. 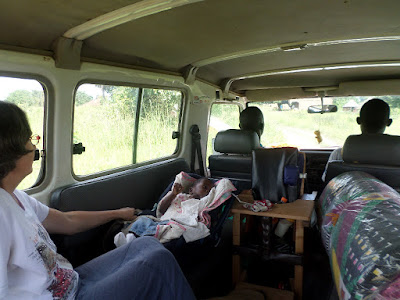 Here we are in the car, on the way to his village. Elias is driving ( the road was bad!) and we picked the policeman from that area. Anneke sit with Richard and we also brought the special chair with us, together with a new mattress, mosquito net, some clothes, some little toys and some food supply. 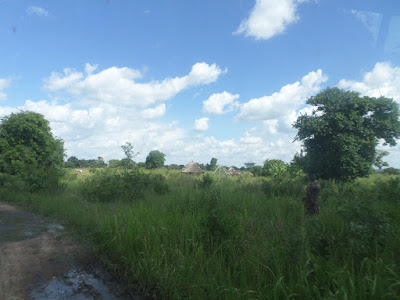 We are now in the neighbourhood, near the place where the grandparents live. 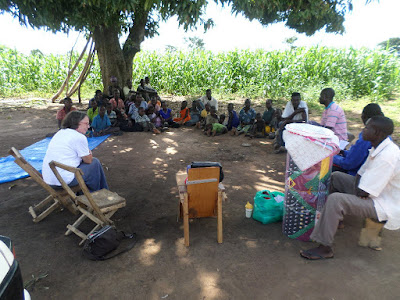 We were welcomed, neighbours who saw the car arrive, came to see what was going on. We put the chair out and Richard in it. You can see him sitting in his chair (in front) and all the people in a half circle  opposite him. We shared about Richard, what he eats and drinks and many other things, we asked if there were questions and tried to introduce Richard to the family. 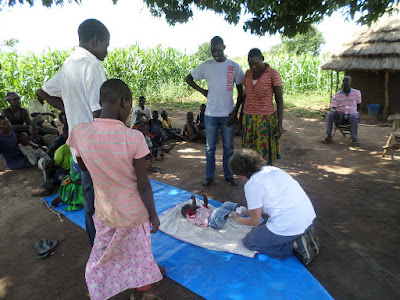 Anneke was demonstratng how to do the simple exercises, and Richard really likes  that . The grandparents were watching. 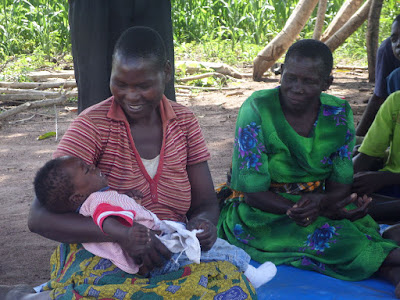 The grandmother is holding Richard in her arms. We all had a good feeling about it, we think that they will care and love Richard. We climbed again in the car and drove back the two hours to Soroti. We will check on them in a month.
Posted by Amecet at 11:29 AM