It was a crazy day today! let me share about it.
There was a big ceremony on the sport field in Soroti: Teso safe Motherhood celebrated their 10 year anniversary. This organisation helps pregnant women with safe deliveries (and more). As Amecet we were also invited, to be part (with other organisations) of the exhibition. So we were there with some of the bigger baby's and some toddlers and staff. 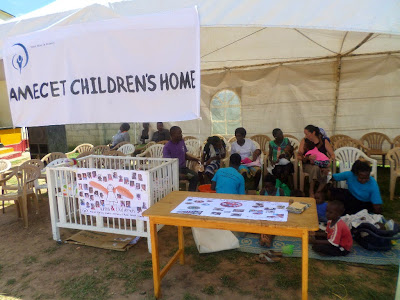 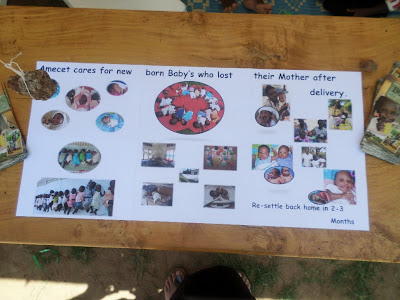 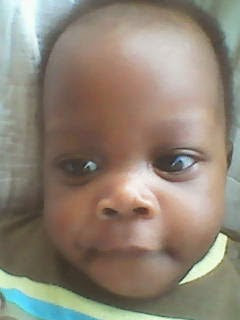 It was a long day which started at around 10 am and it went on till 4 pm. We had diapers, milk and other things with us and the children did great! There was some singing and some role play, but most of it were speeches. Halfway I was called by Amecet, that the family of John was there to pick him. So I went back to Amecet, with Sarah, carrying John. he has been with us from the end of January, and was very ready to go back home. He  lost his mother after the delivery and was brought to Amecet, weighing only 1.8 kg. Now he was 4.8, so he gained 3 kg! After we had given him over to his family and explained everything to them, they left, back to their home, in the village. We pray that he will be a blessing to his family and that they will love him and care for him. Janneke went that morning with a very sick baby to the hospital and she was not back yet. The baby was one of the twins we had taken into Amecet, just 2 weeks ago, Mary and Joseph. Joseph has been sick since Wednesday and we were really worried about him. Earlier that morning I called to the father, because we felt that they should know and come to see him. I went back to the sports field, to the ceremony.  And when we came back in Amecet at 4.30 pm the father of Mary and Joseph was there. he was sitting next to Jospeh, he was really sad, he lost his wife just 2 weeks ago and now his son was so sick. After a while he left and we promised him that we would call him if there was any change. I also talked with him about the possibility that Joseph could die. He understood and I really felt for him. Janneke was going to stay with Joseph that night. She felt 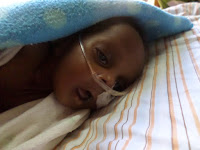 that he could die that night and she wanted to be with him. We had prayed that morning for him and we all realised that he was very sick. I also went home, together with my daughters, knowing that I could expect a phone call. And that phone call came, at around 7.30 pm Joseph went Home. His suffering is over. I have called the father  to tell him the sad news. Tomorrow we will go to the village, to bring the coffin with this little body. 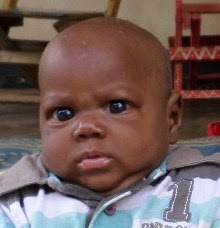 I want to ask you to pray for the family of Joseph and also for our staff. we have some new people who joined us and they were quite upset about the death of Joseph.
I have another child I want to ask your prayers for. That child is Thomas. I have written about him before, he was a very small baby when he came via the Police in Amecet. We failed to locate any relatives and now we discovered that Thomas has an eye problem. Janneke took him to the Eye hospital in Tororro on Thursday and they found out that he has glaucoma in both eyes. This is a serious problem and he can become blind if nothing is done. Thomas will be operated on Monday 18/5/2015. We really appreciate your prayers for this operation, pray that this one operation will be enough to help Thomas and pray for the doctor who will operate, for wisdom and skills!
You can imagine that it was a crazy, busy and emotional day......and tomorrow..... there will be a new day again!!!
Posted by Amecet at 1:11 PM

I have four adopted Ugandan daughters, Mary, Sarah, Helen and Catherine. I hope you enjoy our stories, please if there are comments you can put them directly on the Blog or you can contact us by email:

info@amecet.org
Amecet Donations:
They can be send to the DFCU Bank
Swift code: DFCUUGKA
Beneficiary Name: Youth With A Mission Amecet (Soroti)
Benefictiary account: 1028 011 06 0000108
For our Dutch readers: via Heidebeek, YWAM Nederland, Mussenkampseweg 32 te Heerde
IBAN: NL38RABO0326521062 mvv. YWAM Soroti, Amecet 2993
Please send us an email, so we can trace it, if necessary.