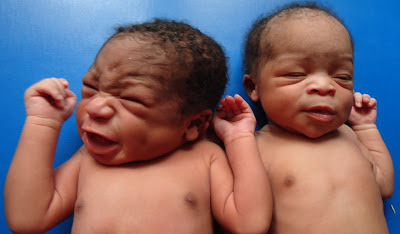 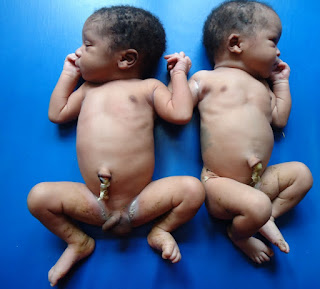 This morning they came to ask help for twin baby's, who were born in the night by a caeserian. The mother died after the operation. We are full, especially with small baby's, but what can you do? Two little baby's without a mother in the village are at risk. So we told them to bring the children. The father had already taken the body of the mother to the village, the grandmother was still with the baby's in Soroti hospital. A girl and a boy! They are good is size, the girl was the first born, weighing 2.7 kg and the boy weighs 2.9 kg. You can really see the extra 200 gram! They look healthy.
We are really full, we got so many baby's in the last 2 weeks! Yesterday Dennis went home, he was with us since August last year, he comes from Karamoja, north of Soroti. He was brought that time, by the Probation officer of Kotido, but it had taken too long to pick him. It is quite far and a very bad road. And last night the police brought a boy from maybe 9 years old. He was found on the streets. We tried to get some information from him, he only spoke Kumam, and he refused to talk. On a certain time he said that he knew his home, so Simon came and took him in the car to his home, but one hour later he came back with him, that he drove all over Soroti and the boy was confused. This morning I heard commotion at the gate, he had escaped and Anneke was running after him on the Lira road (must have been quite a picture!) some people who were walking there caught him for her and she brought him back in. I heard then that the boy has been crying since 5 am, trying to escape, spitting and urinating everywhere, beating other children. That is not acceptable, I had a (quite) tough talk with him, and told him to sit and not walk out. I had to sit next to him, other wise he would run out again. Simon came and took him back to the police, where at that moment just his mother was, to ask if he had been found! So that was a good end of this story. I do hope no more little baby's, we are too full. We have also some sickness under the staff, I was myself quite sick this last week, have been on IV drip, but now I am doing much better. Please pray for the staff, there are now so many baby's to feed, it is very busy.
Posted by Amecet at 1:37 AM