A new family for the twins and....Back to school. 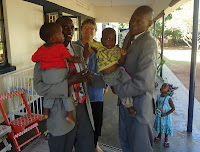 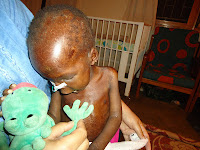 The first picture is taken on 28th of March, it is a picture of William, a very sick boy of 2 years old, who was taken into Amecet together with his twin brother, Augustine. It was a very sad story, his mother rejected them and also their relatives didn't want them. William was even too weak to sit, he lost his eye, because his mother poked in it with a stick. I had been worried about him, would he live?? YES, he lives, and he is even more heavy than his brother, he can ran, he can talk and he can sing!! Today we were very happy that there is an Ugandan family who wants to adopt both of the boys! Today we witnessed the giving of the twins by the Probation officer of Soroti, to the new father. And this is only two months later, God knew that these boys had suffered and wanted to place them in a new, loving, christian family! We pray that they will be a blessing to each other! 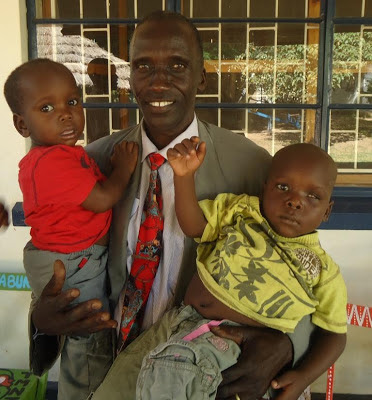 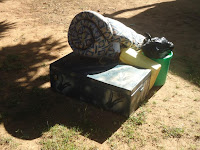 Everywhere in Soroti you see this kind of luggage standing, on the back of bicycles, motorbikes etc. The students are going back to school! Many secondary students go to boarding school and they travel with a mattress, bucket, jerrycan and a metal box with a BIG lock on it to keep their personal things. We have been busy in Amecet today, with our secondary students, to make sure that they came, to pay their school fees and the boarding fees. This second term is 12 weeks long, than there is another holiday, which is followed by the last and third term.

Also my girls went back to school, all in their different uniforms. Left is Mary, she goes to S 3, then Sarah who is in P 7, Helen is in P2 and today was the first  schoolday for Catherine, who went to the baby class from the nursery school. After I brought her, (she was very excited), I told her that I was picking her again a bit later, she started to cry, I left and later called the teacher, who told me that she was fine, she was coloring. So it was an important day for us today! 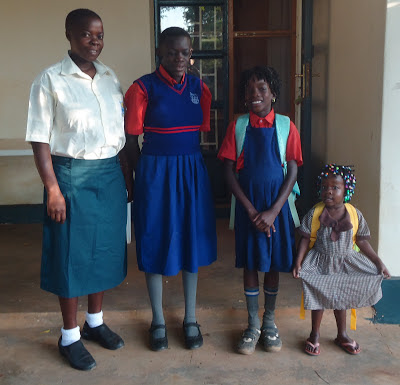