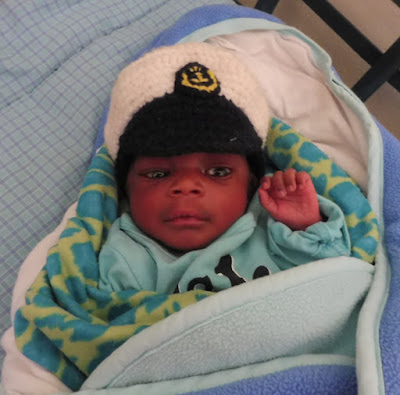 This is Jesca, she was brought yesterday, at the end of the afternoon. She was born earlier that morning. Her mother passed away after the Cesarean operation. Very sad, Jesca was born premature and her weight is 1.7 kg. Jesca drinks good and is very alert, as you can see! I love the little cap the staff had put on her, it suppose to be a dolls cap, but Jesca is so small, it keeps her head warm!! 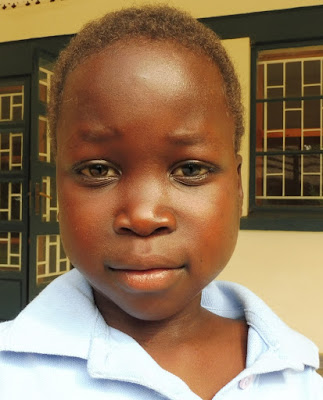 This is Michel, he was brought to Amecet 2 days ago. His family neglected him terrible. He is HIV+ and has a wound at the back of his left leg. There is an infection inside of his leg, they told us that it is like that for two years now. Pus is coming out, so Michel often had to sleep outside, in the bush, because the wound was smelling. Michel is 7 years old and such a sweet, kind boy. This child has suffered so much.... I don't know what is all in front of us, but I knew that we would take him in Amecet and we will see.... Yesterday we took him for X-rays of the leg, and we didn't get good news. He broke his leg, (upper femur) two years ago and got an infection. It devellopped into osteomyelitis. The only way was to operate his leg and get the old bone out and clean the infection... The doctors, we saw, told us that it was a big infection. last evening we had an appointment with the orthopedic surgeon, but after more than one hour waiting we heard that she was still out and we could come back the next day at 8 am. So today at 8 am we were in the clinic again, she looked at Michel and the X-ray and told us that they could help him... we came back to the clinic a bit later and Michel was admitted in the ward. We decided we would take a small room for him alone, to make the chance smaller that he would get infections. 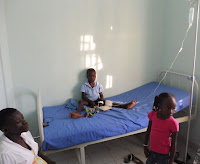 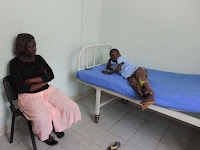 Our nurse, Deborah was sitting with him on the room, normally the family members are with the patient, but now we have to stand in for them. They waited for the doctor the whole afternoon, Michel hungry, as he was not allowed to eat. At the end of the evening I went to pick Deborah and bring Peace, one of the staff members, to stay the night with him. Cathy and Sarah came with me, Cathy wanted to bring him an orange, but I had to explain that that would not be a good idea, since Michel was hungry, but not allowed to eat, so she brought a drawing instead. Michel is on IV drip, still waiting for the doctor, I just called Peace right now (8.30 pm) and she told me that they just took him to theatre for the operation. please pray with us for Michel.. I will let you know how he is doing..
Posted by Amecet at 10:48 AM