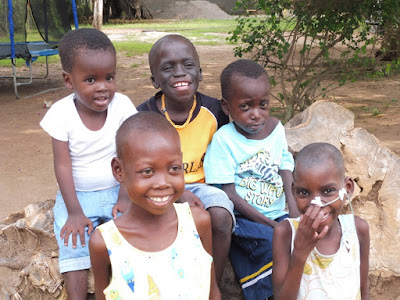 At the moment, we have 5 children in Amecet who are getting the ARV medicines. This means that they are HIV+ and getting the medicines to slow down the growth of the HIV virus. If you read our blog regular, you know that we have lost several of the older HIV+ children. They were just too sick, didn't want to take their ARV's at home and got resistant. Those 5 children are doing well, except  we have worries about Jennifer (in front at the right) she doesn't want to eat and we have to give her a NG tube. But she is happy and plays games with the other children, it is only the eating, she is not gaining at all. 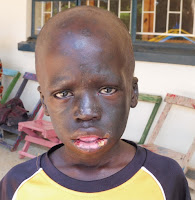 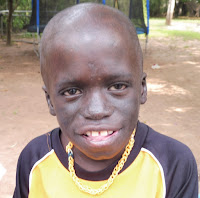 This is Kenneth, he came to Amecet in June and had many wounds, was sick and weak. But the medication for the wounds and other problems helped him, he gained one kg. a week and he started to go to our Harmony primary school. He loves to go and is doing well there, but see the difference in the two pictures!!! He is 11 years old. 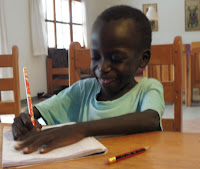 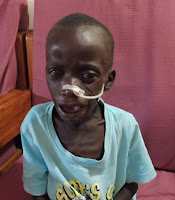 Then Moses, the picture at the left was taken when he was just in Amecet. He is 7 years old and he was very miserable. Did not want to eat, was sick and angry. But also Moses started to gain, also one kg. a week. And he got more happy, we took the NG tube out and he ate very well. He saw a school bag in the office and decided that he also wanted to go to school. Since he never went to school, we talked with the headmistress of the Pre school and he is now in Top class. Look at the picture at the right, that was today, he was very proud that he had "homework"!! Later on he was crying, it took a while before we understood what the problem was: he homework was done and he wanted more!!!!!!
It makes me really happy when I see the children getting better, Also the other 3 children in the picture, Jackson, (left behind) is going to school and loves to write and play, Maliamu, (left at the front) She is 11 years old and is with us for one week, She might also be able to go to school soon, she is doing good and is a happy girl. My prayer is that Jennifer will also pick up and could go to school with the others, for now she is still too weak.
Posted by Amecet at 7:57 AM