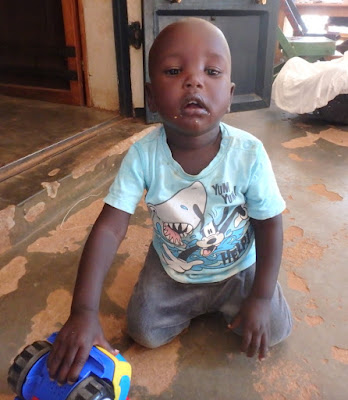 This little boy was brought into Amecet on 23rd of March 2016. He was brought by the Police of Serere, a neighbouring District. They had found him on the road, all by him self.  Of course the Police tried to ask people around if they knew the boy, or did they see anybody with the boy, walking on the road?? Nobody had seen anything or knew the little boy. The Police brought him to Amecet, while running radio messages on the local radio.
We think, is he around 1,5 or almost 2 years old. he doesn't talk, but he can run and walk and play. maybe he doesn't want to talk, he cried a lot and he was unhappy. The toys he saw in Amecet helped a bit and also the food we offered him, but sleeping in a bed.......that was not what he liked... We had to give him a name, so we don't call him "boy"or so, the name became Ruben. But of course he didn't respond to it for days, but now he listen when you call him Ruben. He is much more happy and is playing a lot. He is a cute little man. You wonder how anybody can leave a child behind, what problems or despair are behind this all??
No one reacted on the radio messages, we kept contact with the Police in Serere, they still tried to find some relatives, but nothing worked out.
So last week, Elias and Emmanuel, our social workers, drove to Serere, with Ruben, to try to search and to hang posters with his picture. They hang the posters on different places, where people come, like the police station, the health centre, the notice boards, the shops and the drinking places. 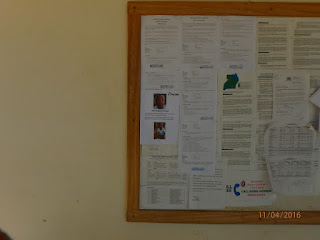 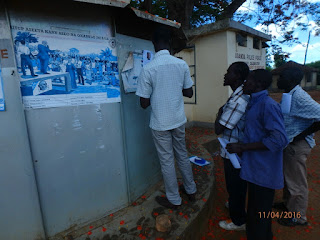 Half way, they were called, people knew about this, they told Elias and Emmanuel that there was a certain woman who got a fight with her husband and she ran off and left the child somewhere on the way. The people were willing to bring Elias and Emmanuel to the father, who lived in the neighbourhood. So they drove and talked with the father, but no, he said, this is not my son, and he showed them his son, who was already brought to him.... 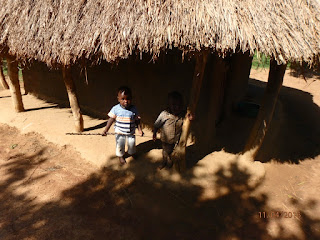 Ruben stands at the left, they are of the same age and they went through the same experience, except that the little boys father was found fast and Ruben is still waiting....

This was not as rewarding as we had hoped, but the next day we got a phone call (our telephone numbers were on the poster) and someone knew the family. The father had left to the other side of the country and the mother was so frustrated and had left the child somewhere. We contacted the police and later they confirmed the story and they were going to find the mother. So we wait again, but there is hope that we can bring Ruben back to his relatives, and there is where he belongs!!!!!!!!
Posted by Amecet at 1:40 AM