Some update about the older children in Amecet..

It has been a while since my last blog, but it doesn't mean that nothing is happening in Amecet..... We have been quite busy. In the blog of December 7, I wrote about Siliver. Yesterday we brought him back home, he gained 7 kg in the 2 months that he was in Amecet. Our Social workers have been talking with him and also they went to the village to talk with his relatives. Siliver wanted to stay with his grandmother and Simon and Elias have been talking with the relatives and together they agreed that Siliver will be staying with his grandmother, Siliver was very happy!!! 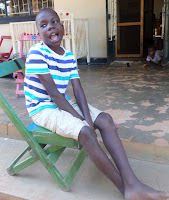 A difference of 2 months and 7 kg. between these 2 pictures! 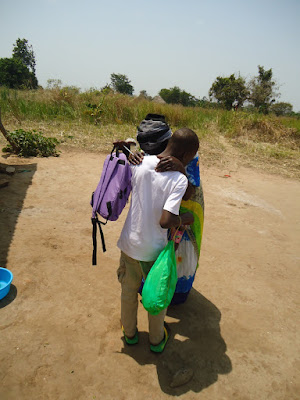 This is how his grandmother greeted Siliver, when we brought him back!!
We also have been getting new children in Amecet, my last blogs was a lot about babies, but we still have also bigger children in Amecet. 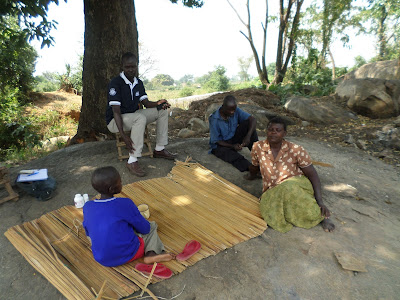 At the end of January, we received a phone call from another organization, if we could help with Charles, a 13 years old boy. We got directions and Elias and me went to see the situation.
We talked with the parents and with Charles. He is HIV+ and is sick since November. Lost a lot of weight and is very weak. We felt we could help, also beacause he has a good support behind him from his parents, for after Amecet. So on Feb. 1, Charles came to Amecet. 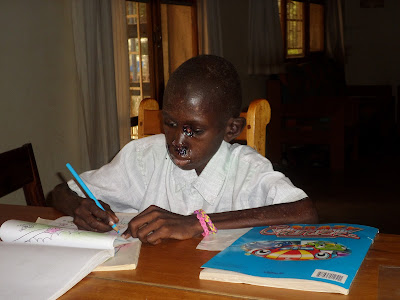 His ARV's were changed and tests were done, he was sick and so weak, he received blood transfusion and is doing better, but we do need to see him eating more and better, he is still very malnourished (20 kg). But to see him coloring and smiling is a big improvement. We are treating the wounds he has on his face, but because of his low immunity, the healing also goes slow. 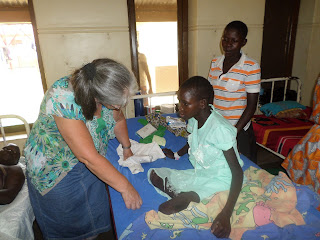 In the meantime we got one of our girls back in Amecet, Norah has been in Amecet in the past, but last year she has been with us also for a while, she was very weak of TB and was admitted for a period in Soroti Hospital. Now she came to Amecet, just before the Amun week in January, at the end of the Amun week she fell sick again and we went to the Doctor for tests and treatment. She was even admitted in Soroti hospital, where she is still at the moment. They found out that she has an infection and she is resistant to most of the drugs we use, so we had to buy special very expensive drugs to treat this infection. We hope and pray she will be better soon. We go visit her once or twice every day, we also have to bring food for her and her sister, who takes care of her, while being in the hospital.
I can give some news also about Innocent, he is still in Mulago hospital in Kampala. We do not see him often, but we do have telephone contact with his mother and older brother, several times a week. Innocent is finished wit his chemo therapy, and the doctors are very content with how that went, but the big problem is now malnutrition, he is very weak, was fed for w while with a feeding tube, but he seems to do better now. He is eating him self and all the tests came back negative, so that is good news. Please keep praying for him, he needs your prayer support!
Posted by Amecet at 11:44 PM