A home for Joseph and Anna keeps fighting... 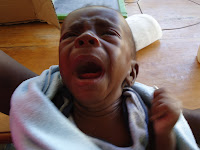 October 23 2012 Little Joseph was brought in Amecet, he was born in prison, where his mother stays, and he was not drinking and sick (read the blog of Oct.23, 2012) We struggled with him and at one point he was so sick, we feared for his life! But he came over it and even his DNA test for HIV came back negative!!! His mother has to stay for several years in prison and we spoke with her about a place for Joseph. The sister of the mother and her husband are willing to care for Joseph as long his mother is in prisons. We are so happy for Joseph, and he looks so good and he is such a happy fellow, as you can see on the picture below. 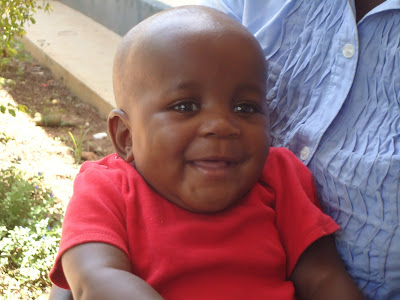 I want to give you an update about Anna. After the blood transfusion, last week, she was a bit better. But she still has fever and she has still this swollen tummy. But she pulled the NG feeding tube out. We tried to feed her only by mouth and that went very well. She is drinking good! She is also passing urine and stools frequently, so that are positive signs. But this week I really didn't like the way she looked, so yesterday I did another Hb blood test and that showed that it was higher than last week, but still not good. I also did a HIV test and that was negative, so we are happy with that. Yesterday I tried to call the paediatrician for advice, I couldn't get her. In the evening we went to eat in a restaurant in Soroti town and there was Dr. Florence!! We talked and she promised to come and see Anna the next morning. And this morning she came, just when the breathing was not going so well. We had to put her on the oxygen machine and go to the hospital for another blood transfusion. We did that all this morning, I must say I really feel for this little girl, she is touching my heart, she has been going through so much in her 1 month old life. Sometimes she can look at you with those sad eyes, I don't know what to say to her... Please pray with us for this little girl, who is such a fighter. This picture below, I just took when we came back from the hospital this afternoon. She is on oxygen and she has a wet cloth over her because of the high fever (39,9). I would love to see her live!!! 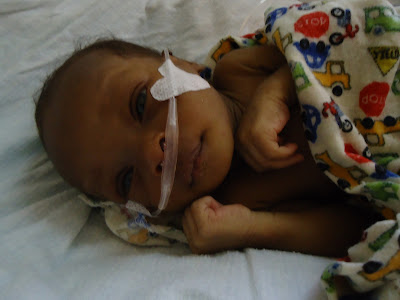 I have four adopted Ugandan daughters, Mary, Sarah, Helen and Catherine. I hope you enjoy our stories, please if there are comments you can put them directly on the Blog or you can contact us by email:
info@amecet.org
Amecet Donations:
They can be send to the DFCU Bank
Swift code: DFCUUGKA
Beneficiary Name: Youth With A Mission Amecet (Soroti)
Benefictiary account: 1028 011 06 0000108
For our Dutch readers: via Heidebeek, YWAM Nederland, Mussenkampseweg 32 te Heerde
IBAN: NL38RABO0326521062 mvv. YWAM Soroti, Amecet 2993
Please send us an email, so we can trace it, if necessary.